The Nebraska Physicians Cancer Screening Initiative was a collaborative physician-led initiative to (1) bring additional public awareness to the importance of colon and breast cancer screening (2) and to help healthcare providers standardize processes, measurements, and tracking to improve patient outreach.  Taking this proactive approach measurably increased the number of people who have been screened since the project began. Partnership for a Healthy Lincoln (PHL) led the one-year the project to implement clinic-based quality improvement.  The initiative was in alignment with the American Cancer Society and University of Nebraska Medical Center College of Public Health target of increasing the number of Nebraskans who are adequately screened for these cancers to “80% by 2018”.

PHL President, Dr. Bob Rauner, and Lincoln physicians, Mike Rapp, and Brandon Webb developed the initiative and through their efforts, 32 primary care clinics representing more than 179 primary care providers joined the effort including physician members of The Physician Network, OneHealth Nebraska, SERPA ACO, Bryan Health Connect, the Lincoln Family Medicine Program, and Bluestem Health Center. Drs. Rauner, Rapp, and Webb created this project because Nebraska has a higher number of colon cancer cases than other states, yet lags behind in screening.  While the project began as a Lincoln initiative, the project ultimately included providers in Grand Island, Omaha, Nebraska City, Gering, Columbus, and Norfolk. The project was funded by Blue Cross and Blue Shield of Nebraska, the COPIC Foundation, and the Nebraska Medical Foundation.

An ongoing consumer oriented cancer screening education effort led by Lancaster Crusade Against Cancer (LCAC) complemented the project. The LCAC coalition continues to focus on getting the message out to the public about the importance of cancer screening.  More information.    Resource links 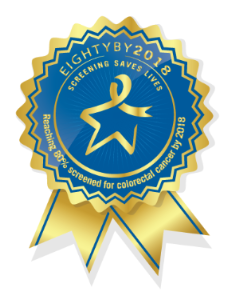 The cancer screening initiative worked to save lives through early detection of breast and colon cancers, catching them in their earlier, more treatable forms.  Participating primary care clinics launched systematic efforts within their clinics to encourage and promote screening among their patients through outreach and in office consultation, including using every visit to verify cancer screening status and contacting patients who haven’t been seen in a year or more.  All participating practices achieved significant colorectal cancer screening rate increases, with some surpassing the 80% screening rate goal.

Because of this significant increase in screening rates, the National Colorectal Cancer Roundtable (NCCRT), an organization co-founded by the American Cancer Society and the Centers for Disease Control and Prevention, honored Partnership for a Healthy Lincoln, with a national achievement award recognizing community leadership in the ongoing effort to save lives through early detection of colorectal cancer.  One of seven honorees nationwide, Partnership for a Healthy Lincoln received the 80% by 2018 National Achievement Award in the community category for the Nebraska Physicians Cancer Screening Initiative.