Partnership for a Healthy Lincoln promotes healthy weights and choices through our Healthy Beverage Initiative, Rethink Your Drink.  Getting the facts about your beverages helps you to make a more informed and healthy choice.  Learn about KIDS AND ENERGY DRINKS.  Learn more about other beverage choices like soda and sports drinks. 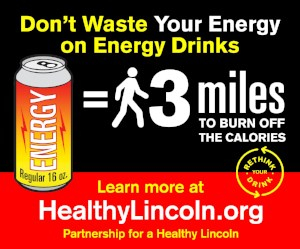 Energy Drinks, Weight Gain, and Disease
FACT - Regular calorie energy drinks are loaded with sugar and caffeine.  According to the Centers for Disease Control and Prevention, soda and sugar-sweetened beverages like energy drinks are the TOP contributors of added sugar to the American diet. The average American consumes about 45 gallons of sugary drinks per year.  Sugar-sweetened beverages are defined as those providing no or little nutrient value and containing primarily sugar.  Drinking too many sugary beverages is a leading contributor to the obesity epidemic.  Obesity increases the risk of diabetes, heart disease, arthritis, asthma, and certain types of cancer.  More than one third of U.S. adults are now obese. 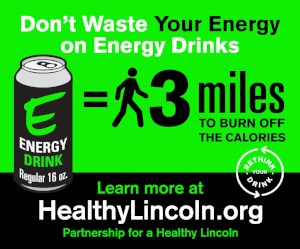 Energy Drinks and the “Quick Fix”
FACT - There are several problems with energy drinks including how they “fix” the problem of being tired.  In short - they don’t.  It’s a fact – adults need from 7-9 hours of sleep.  A body that needs eight hours but only gets seven hours, will be tired. Some extra caffeine might make up for a short night now and then, but there is no replacement for sleep.  A “jolt” of caffeine may be a short term remedy, but it is generally followed by the inevitable “crash”.  Caffeine in coffee or tea is generally safe in reasonable amounts, but energy drinks often exceed recommended levels and even add other stimulants like guarana and taurine.  Good studies on the safety of guarana or taurine supplements are lacking.  The over-consumption of heavily caffeinated energy drinks has been linked to death in some young adults.

“Diet” Energy Drinks
FACT - Studies to date have shown that switching to diet drinks doesn’t result in weight loss.  Even worse, many show that the opposite happens; drinking diet energy and other artificially sweetened drinks is associated with gaining weight.  The conclusion of several studies is that artificial sweeteners make you hungry.  So, although the diet energy drinks have no or fewer calories, they make you hungry which can lead you to eat more food 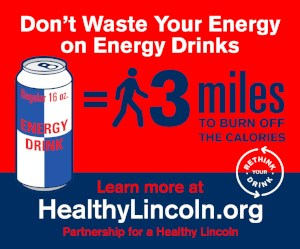 Energy Drinks and Alcohol
FACT - Energy drinks typically contain caffeine, plant-based stimulants, simple sugars, and other additives. According to the Centers for Disease Control and Prevention (CDC) combining energy drinks with alcohol increases the chances of alcohol overdose. Alcohol alone is a sedative but the stimulants in energy drinks can blunt the sedative effect leading to even more alcohol consumption -- increasing the chances of consuming a dangerous amount.  In 2015, 33.5% of young adults aged 19 to 28 reported consuming alcohol mixed with energy drinks at least once in the past year.  Studies have found (1) those who binge drank were more than twice as likely to mix alcohol with energy drinks as non-binge drinkers (2) drinkers aged 15 to 23 who mix alcohol with energy drinks are 4 times more likely to binge drink at high intensity, and (3) drinkers who mix alcohol with energy drinks are more likely report unwanted or unprotected sex, driving drunk or riding with a driver who was intoxicated, or sustaining alcohol-related injuries.  Caffeine has no effect on the metabolism of alcohol so it does not reduce impairment due to alcohol consumption.  In other words -  it does not “sober you up.”